Do as the Expats Do

Rome is full of foreign residents, but how do they live, and what do they love most about the city? Filly di Somma asked expats of the most diverse nationalities—all Romans by adoption— to share their tastes and preferences on how best to enjoy the Eternal City. Read on for a fun (and completely unofficial) survey.

Tens of thousands of expats live in Rome, from the most diverse cultures all over the world. Foreigners who move here are often entranced by images of this Eternal City that breathes and lives in every showy monument and hidden corner. However, many find that the initial love at first sight is followed by a less romantic and more realistic approach to city life. Rome has a reputation for being an extraordinary place to visit and a complicated place to live.

At first glance, the elegance of the architecture, the incredible food, and the many cultural attractions seem accessible to everyone, but just as expatriates begin to settle down and get lost in the logistics of organizing their new lives in Rome, they often discover that  the city is complex and indefinable. That said, the expats who stay in Rome long-term are convinced that the concerns and frustrations of everyday life are happily dispelled by the magic of the city. Their attitude is, “Rome, you’re di cult, but I love you anyway.” A rich food and wine culture and an unparalleled wealth of art and beauty offer limitless opportunities for residents to experience the city, so the rest becomes a negligible detail. It is a classic love hate relationship, but one in which love always wins. 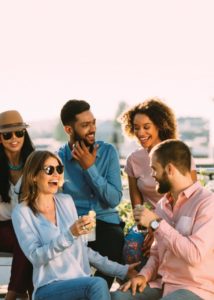 To learn what Roman transplants of the most diverse nationalities prefer about their adopted city, we’ve conducted a mini survey without any statistical ambitions, and in the spirit of international interest, we are sharing our findings with our own diverse readers.

Residents from Argentina love to stroll in the picturesque Monti district, have lunch at the Galleria d’Arte Moderna, enjoy the beauties of Villa Borghese, and sip an aperitif on the Pincian Terrace at sunset. Trastevere and the Jewish Quarter are their favorite neighborhoods for sampling authentic Roman cuisine, followed by late-night fun in Campo de’ Fiori. Brazilians, like all true hedonists, adore Italian gastronomy, shopping, attractions, and nightlife. Warm and extroverted, they find themselves in harmony with the Romans’ Latin character, which is naturally based on sharing—in particular good food. Arab expats, particularly those from Morocco, are attracted by the history and artistic heritage of Italy’s capital city. The Colosseum, the Sistine Chapel, but also the ultra-modern MACRO and MAXXI, make them fall in love with Rome. Testaccio is their favorite neighborhood and a stop at a pizzeria is a must. French expats refer to Rome as the city of the ve senses, where all the sensations are exalted. They particularly appreciate the friendliness of the inhabitants and the city’s timeless beauty and charm. Their favorite spots are Piazza Farnese (where their own embassy is located), Villa Medici (the seat of their national academy), and Trinità dei Monti church.

Germans usually crave quiet and peaceful places, so a walk along Via Appia Antica is always a favorite, as well as the Orange Garden, the Non-Catholic Cemetery, and the German Academy at Villa Massimo. They are big fans of Roman cuisine, and prefer the city’s simple and traditional restaurants, where they enjoy above all else the convivial atmosphere and the cheerful confusion. Expats from the USA are addicted to Italian gelato, and their preferred mode of transportation is a Vespa, perhaps in their effort to recreate the famous Roman Holiday scene. They love the Spanish Steps for its scenographic appeal, and of course the Colosseum and the Pantheon, majestic monuments far older than anything they’ve got back home. Carbonara and amatriciana are their favorite dishes, both of which, just like pizza, are a true expression of Italian pop culture. Trastevere is their neighborhood of choice, and they prefer its traditional osterias to the more refined but sterile gourmet restaurants.

All foreign residents, no matter their origin, love Rome for its climate, food, and people, but the tricks and strategies to adapt to Roman life can vary. One important expat tip is to avoid comparing one’s new country of residence with their homeland; this helps sidestep the common sense of frustration that things should work better or differently within the Italian system. The attitude of well-adapted expats is not to expect the local culture to change for them, and the Swedes, for example, excel at this. Their favorite neighborhoods are the Aventine, Trastevere, and Testaccio, and they adore Rome’s climate, atmosphere, food, the warmth of its people, and the sense of safety in the city, even after dark. Mexican expats see Rome as a vast open-air museum. They are lovers of history and to them, Rome and its millennia-old civilization are a paradise of culture. They are attracted by the open and jovial character of the Romans, an aspect they share, as well as their communicative vein that immediately runs to familiarity and confidentiality.

British expats love to take walks in the city’s immense parks, characterized by the evocative combination of art and nature. For them, discovering Rome through its enchanting gardens is pure delight, both for the spirit and the eyes. They love to follow the traces of their own literary heroes, which is why their favorite sites are the Keats-Shelley House, the Non Catholic Cemetery, and Centrale Montemartini—the latter also favored by Prince Charles on a recent visit to the city. Just like the locals, Spanish expatriates love nightlife, having fun, and going to the clubs of Trastevere, Piazza Navona, and Campo de’ Fiori in the wee hours. Their favorite cultural sites include Galleria Borghese, the Roman Forum, and Villa Pamphilj (the latter is especially beloved at sunset). Russians in general have always been lovers of exclusive shopping and sophisticated luxury. Those who make their home in Rome prefer the most elegant streets, such as Via Veneto, where they can purchase the latest couture fashions, dine at Michelin-starred restaurants, or have a drink on the terrace of a five-star hotel. Their favorite cultural destinations? The Fontanone del Gianicolo, the Orange Garden on the Aventine Hill, the Baths of Caracalla, and the Aqueduct Park.

Japanese expats are refined gourmets, and always select restaurants of proven quality. Tireless shoppers of all things Made in Italy, they are just as curious about the beauties of Rome, in particular itineraries that favor Caravaggio, baroque Rome, and Michelangelo’s masterpieces. The Chinese, on the other hand, are fervent admirers of the most iconic monuments of the city, such as the Trevi Fountain. They have a weakness for Italian cuisine, and appreciate its simplicity; when it comes to pasta, they tend to prefer spaghetti, closely related to Chinese noodles. The same is true for Koreans, who are crazy about pasta and pizza, icons of Mediterranean cuisine. When it comes time to shop, they head to the city’s chicest shopping streets such as Via Condotti and Via Borgognona, and in fact, the whole area around Piazza di Spagna is their favorite place for taking walks. Last but not least, Indian expats are attracted to the city’s most colossal monuments, in particular the Colosseum, the Monument to Victor Emmanuel II, and the Sistine Chapel. The ritual of shopping is an essential experience for them, carried out in the local market like the one near Piazza Vittorio, rich in spices and ethnic foods. 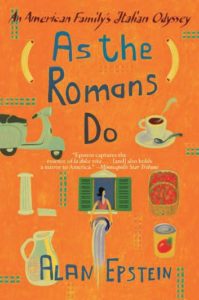 In 1995, after a 20-year love affair with Italy, American author Alan Epstein fulfilled his dream of living in Rome. In As the Romans Do, Epstein celebrates the spirit of this unique city that formed the center of a vast empire and brought Mediterranean culture to the world. The memoir also reveals today’s Romans in all their lovable contradictions: their unifying coffee culture, their innate artistic style, their passionate appreciation of good food, their instinctive distrust of technology and progress, their striking sex appeal, and their remarkable expressiveness, in both words and gestures. Pick up a copy at Otherwise Bookshop, Via del Governo Vecchio, 80.