The New Frontier by Antonio Lapone

This month’s Where Rome has the honor of publishing on the cover a work created exclusively by Antonio Lapone, a famous Italian cartoonist and illustrator who has found success in Northern Europe. His elegant style and choice of subject matter—Lapone’s works often feature graceful female figures—have brought him considerable acclaim from the art world and led to several important commissions and exhibitions throughout Europe. Stiletto heels, cats, windows that light up in the night, the radio, vistas of New York, and departing trains are just a few companions to the journeys made by women, and are recurring motifs of Lapone’s pieces. 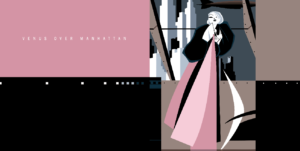 Lapone’s most noted works find an intense and profound narrative in his recent artbook, The New Frontier. It was conceived as a fantastic journey between reality and imagination and is set in both distant countries and future cityscapes, where heroines make long journeys, await answers, love music, and dance with colourful cocktails in their hands. As well as being an evocative story and a tribute to a long gone past, the book is also, from a design point of view, a new challenge. Collaborating with graphic designer Miss Fabiani, Lapone has found a creative extension to his usual work. 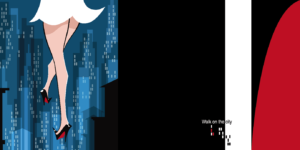 The illustrations, which evoke an unmistakable turn-of-the-century style, and the retro graphics, inspired by the album covers of the Blue Note Records label, combine to create a new artistic style, a harmonious synthesis of illustration and graphics, comics and art. 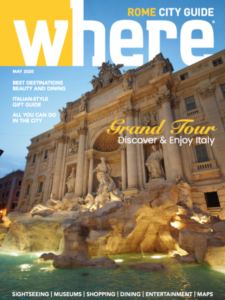