Rome is famous the world over for its unrivalled beauty, majestic monuments, spectacular squares, eye-popping churches, imposing fountains, and many other wonders. But there is also a secret Rome, full of little-known corners, unexpected piazzas, and hidden treasures that are equally fascinating. And even more so for the fact that most tourists don’t even know they’re there.

THE GARDEN OF PALAZZO VENEZIA
Inside Palazzo Venezia lives a small green paradise: a hidden Renaissance garden enclosed by walls, arcades, and arches. It’s a tranquil spot, despite being in the heart of the city, with a garden made up of winding gravel paths, lush vegetatio, blossoming flower beds, palm trees and magnolias, with a centerpiece of a delightful fountain adorned with statues.

PIAZZA DEI QUIRITI
The most beautiful square in the Prati district may also be its least well known. At the center of this circular piazza stands the Fountain of the Caryatids, considered scandalous in its time for the four nude female statues that support a basin topped with a pine cone.
PIAZZA CAPRERA
This circular piazza in the Trieste district is surrounded by small, elegant villas, with a fountain in the middle and two porticoed buildings in the background. The central fountain was built around the year 2000, with sculptures by the French artist Jacques Zwobada. The square is based on the French urban planning style, with buildings in Art Nouveau style.
PIAZZA GALENO
This elegant square along Viale Regina Margherita, between Via Nomentana and Via Morgagni, is characterized by the presence of several splendid villas. Of particular note is Villino Ximenes, famous for being the first Art Nouveau-style building in Rome. It’s embellished with friezes, stuccoes, and ceramic decorations with oral and vegetable motifs.
QUARTIERE COPPEDÉ
Located in the Trieste district, Piazza Mincio is the gateway to a fairy land, a tiny neighborhood designed by architect Gino Coppedè between 1915 and 1927, and made up of 26 palazzos and 17 villas, each with bizarre features and a mix of Art Nouveau, baroque, and medieval styles. The fountain of the Frogs, the Palace of the Spider, the Cottage of the Fairies, and the Palace of the Ambassadors are just a few of the area’s masterpieces.

PIAZZA SAN SIMEONE
Everyone knows glorious (and crowded) Piazza Navona, but just a few blocks away, Piazza San Simeone offers a different perspective. In the center of the tiny square, a Renaissance fountain splashes delicately, surrounded by shops, and dominated by the aristocratic Palazzo Lancellotti, with its majestic lintel facade and intricately decorated doorway.

PIAZZA MATTEI
This charming piazza is hidden among the alleys of the Rione Sant’Angelo, also known as the Jewish Ghetto, and is surprisingly unknown by the city’s many tourists. The crowning glory of the tiny square is the Fontana delle Tartarughe, a delightful fountain crafted in gray African marble and featuring four sculpted youths, each holding an adorable bronze turtle.
ARCO DEGLI ACETARI
This miniscule courtyard is so picturesque that it has appeared on postcards, yet almost no one knows where it is. Those lucky enough to find it will be enchanted by the hanging vines and rustic ocher-colored buildings with outdoor stairways, typical of medieval villages. The courtyard takes its name from the term “Acetosari,” that is, the vendors of acqua acetosa, who stored their supply here, given its proximity to the market in Campo de’ Fiori. It’s a fragment of a Rome that no longer exists, accessible through an arch off of Via del Pellegrino.

PIAZZA MARGANA
Despite its location just a block from bustling Piazza Venezia, this small square resembles a medieval village frozen in time inside a modern city. It’s surrounded by palaces ranging from the Middle Ages to the 1600s, including Torre Margana, the symbol of the square. The picturesque piazza is animated by enticing restaurants and bars where you can sip a drink or enjoy excellent Roman cuisine in a picturesque setting.
SALITA DEI BORGIA
Hidden in the Esquilino neighborhood is this charming staircase festooned with hanging vines, supposedly once part
of the apartments of the noble Catalan family of the same name. It’s one of the few places in Rome connected to the dark legend of the Borgias—the city’s most notorious family. Intriguing Lucrezia Borgia is remembered as the archetype of negative femininity, while her brother Cesare Borgia, also known as Duke Valentino, the illegitimate son of Pope Alexander VI, was a remorseless murderer and cynical leader, willing to do anything for power. 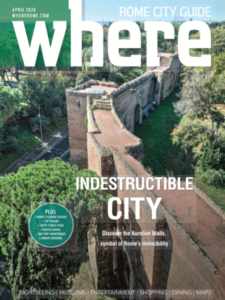