In Rome, finding a shop that knows how to perfectly dress a gentleman is possible thanks to the small but respected community of traditional artisans who understand that a suit must be adapted not just to a client’s physical aspects but also to his personality. Local tailors and designers draw on Italian and international trends to create garments that are both in step with the times and steeped in classic confidence. We present our picks for the best sartorial spots in the city.

BATTISTONI
More than just a shirt maker, Battistoni has been dressing artists, celebrities, heads of state, royals, and entrepreneurs for decades. With a client list that includes Andy Warhol, Humphrey Bogart, Gianni Agnelli, Jean Cocteau, and John Steinbeck, the brand is associated with high-end Italian craftsmanship and attention to detail. In fact, their shirts are typically fitted slightly longer and wider than the standard for an ultra-elegant t. The boutique, situated in the heart of the city’s designer shopping district, was opened by Guglielmo Battistoni in 1946 and is now helmed by his grandchildren, Gianni and Simonetta. Via dei Condotti, 61a.

EREDI PISANÒ
Founded in Rome over 50 years ago, Eredi Pisanò is a family-owned and operated clothing company with a serious reputation for style. Now recognized as a go-to spot for classic Italian fashion, the brand has expanded beyond its home country into the USA, most notably in New York and San Francisco. Its distinctive collections have become an emblem for Made in Italy tailoring and manage to skilfully balance traditional styles with contemporary fabrics. Head to the company’s historic home on Via Cola di Rienzo where ceremonial suits, coats, and shirts are all custom made in store. Try pairing one of their dark men’s suits with a more vivaciously colored shirt and tie. Via Cola di Rienzo, 216.

BRIONI
The Brioni fashion house was founded in Rome in 1945 on the bustling thoroughfare of Via Barberini. Since then, the brand has attracted the interest of high-profile personalities from the world of cinema, politics, and business, and in 1952 it organized the first men’s fashion show in history. Held in Palazzo Pitti in Florence, the pageant introduced new silhouettes, bright colors, and innovative fabrics, marking an important chapter in the company’s history. They also introduced the concept of prêt-couture or ready-to-wear haute couture, an initiative that launched the international success of the brand. The enterprise continues to grow and even boasts its own tailoring school, where established techniques are passed on to a new generation of couturiers. Via dei Condotti, 21a.

DAVIDE CENCI
The story of this brand began in 1926 when the garment maker opened his first shop in Rome’s historic Campo Marzio district. For nearly a century, customers have continued to frequent the store for its unwavering dedication to tradition and classic style. The typical patron is a cosmopolitan man who travels, practices sport, uses technology, and loves being outdoors. Now Davide Cenci boasts outlets in Rome, Milan, and New York, but wherever you visit, the message remains the same: timeless Italian elegance and style. Via Campo Marzio, 1/7.

CERRUTI
Founded in 1948, Cerruti was born as an atelier specializing in classic and tailored men’s clothing. Over the years, careful family management has seen the brand diversify its product range and bring in famous British labels such as Loake, Fred Perry, Barbour, and Henri Lloyd. Through its prestigious selection, Cerruti offers a unique blend of Anglo-Italian style in the Eternal City. In 2012, in recognition of its continued commercial success, Cerruti was proclaimed a “Bottega Storica” by the municipality of Rome, one of just a handful of stores bestowed the honor. Via Cola di Rienzo, 46.

BOGGI
Founded in 1939, the Boggi brand is built on four key tenets—elegance, tradition, quality—and to cater to the needs of men all over the world without losing sight of the Italian identity. The strategy has worked wonders, contributing to the brand’s immense growth into more than 38 countries with almost 200 stores. Characterized by a meticulous attention to detail, from production to distribution, the company offers clothes for all occasions, from smart casual to easy formal, right through to life’s most extravagant events. Their premium accessories, all Made in Italy, only cement the Boggi reputation as an Italian tastemaker. Via del Babuino, 20/ Galleria Alberto Sordi/ Via Cola di Rienzo, 266/ Via Appia Nuova,168/170.

HOM’S
A shop focused on classic clothing, tailored products, and casual garments, designed for the man who never gives up on style, no matter the occasion. A discerning selection of brands, including Lacoste, Loake, Marzullo, and Piacenza Cashmere, means shoppers can add to their wardrobe with confidence. The quality of Hom’s high-end, made-to-measure shirts is exceptional. Viale XXI Aprile, 70.

SARTORIA PANICO
After years spent refining his craft among expert couturiers and suit makers, Antonio Panico opened his first tailor shop in his hometown of Naples in 1992. It was such a success that a second store came to Rome just four years later. Located on the luxurious Via dei Condotti, Sartoria Panico displays its exquisite fabrics proudly, arranging samples on antique tables and gilded furniture. Such a rich presentation means shoppers shouldn’t be stuck for inspiration. Via dei Condotti, 33.

SARTORIA SAGRIPANTI
Franco Sagripanti opened his shop in 1964, at only 22 years old. Just over a decade later he became Valentino’s personal tailor and even created hand-sewn collections for the fashion titan’s maison. Today Sagripanti’s boutique, located not far from Via del Corso, is managed by his two sons, Marco and Stefano, who continue their father’s tradition with passion. Here you’ll find classic tailored suits and pret-à-porter fashions with an elegant and unmistakably Italian look. Via della Fontanella Borghese, 27.

ESEDRA 58
Not only does Esedra 58 stitch top-notch suits, it also specializes in the manufacture and sale of outerwear. So, whether you’re looking for a trench coat, jacket, or anorak, you’ll find it here. Don’t hesitate to ask the knowledgeable sta for advice either—owner Angelo Martini has a wealth of experience to draw upon while his son, Giuliano, practically grew up in the store. Piazza Della Repubblica, 58. 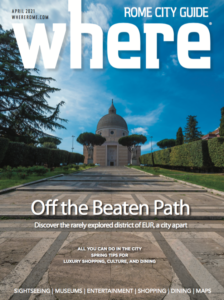