A Splash of History

There’s nothing like a hot July day in Rome to remind you of the importance of water. Fountains have been a fundamental aspect of Roman life for over 2000 years, with 39 monumental ones already up and running by 98 AD. But with the fall of the Roman Empire, the fountains—nearly 600 public basins—as well as the aqueducts that fed them, fell into disrepair. Today, the city has returned to its former greatness, and is filled with the soothing trickle of more fountains than ever before.

Another unmissable urban water work is the Fountain of the Naiads, located at the center of Piazza della Repubblica. Originally a simple pool from the late 19th century featuring a few vertical spouts, the sculptures of four nude naiads were added several decades later, although not everyone approved of the addition. Scandalized by the image of four naked women glistening in the spray of the fountain, the Vatican initially insisted on hiding it with wooden scaffolding, although they quickly gave up when public interest became overwhelming. The site is best visited at night, when the lit-up fountain and surrounding galleries stand out against the dark sky.

The complex of the Four Fountains is a surprisingly picturesque intersection with, as its name suggests, a fountain located at each of its four corners. These depict two river gods, the Tiber and the Arno, and two goddesses, Diana and Juno. From this spot, in addition to the sculpted fountains, you can also enjoy a unique view of three of the city’s obelisks, The Esquiline Obelisk at the Basilica of Santa Maria Maggiore to the east, the Sallustian Obelisk at Trinità dei Monti to the west, and the Quirinale Obelisk to the south, as well as the inner façade of Michelangelo’s Porta Pia to the north. Remember, this is a busy intersection: don’t get distracted by the sites that you wander off the curb.

An often overlooked but historically important fountain is the one found in Piazza Santa Maria in Trastevere. Nestled in the heart of the bustling neighborhood across the Tiber, this fountain is believed to be the oldest in the city, dating as far as the 8th century, and built on the site of an ancient one. Today, it’s more than just an ornament; this work of art-meets-engineering is also a popular hangout, and you may be hard-pressed to find a seat on its steps, where locals gather nightly to relax and people-watch in the piazza.

The Triumph of Water

Magnificent pieces of art, mostra (literally “showcase”) fountains were designed to proudly indicate the end of particular aqueducts. The most celebrated of all is the Trevi Fountain, fed by the Virgin Aqueduct—which was repaired in 1453 and restored in 1650—with the fountain itself completed in 1762 by Nicola Salvi. According to legend, travelers who throw coins into the fountain are guaranteed a return visit to the Eternal City. Also known as the Fontanone (literally “big fountain”), the majestic Acqua Paola Fountain on the Gianicolo Hill boasts water from distant Lake Bracciano. The much criticized Fountain of Moses, full of clumsy and ungraceful details, was commissioned by Pope Sixtus V to celebrate his recently restored Felice Aqueduct, which served the higher areas of the city. Even the aforementioned Fountain of the Naiads was built to celebrate the restoration of the Acqua Pia aqueduct. Other monumental fountains marking the end of an aqueduct are the Fountain of the Triton in Piazza Barberini, the Fountain of the Four Rivers, the Fountain of the Moor, and the Fountain of Neptune in Piazza Navona, and the diminutive Fountain of the Turtles in Piazza Mattei.

A Fountain for Every Neighborhood

For something a little smaller in size, yet packed with homegrown charm, check out the local drinking fountains by Pietro Lombardi, sculpted between 1926 and 1929. There are eight of these ornamental yet functional fountains in total, each located in a different neighborhood, and each illustrating the symbol or characteristics of the area. For instance, the Fountain of Artists on Via Margutta, near multiple artists’ studios, depicts a bucket of paint brushes. In the Fountain of the Cask in Via della Cisterna, water flows from a barrel into a basin bordered by two carafes of wine in reference to the many taverns in Trastevere. 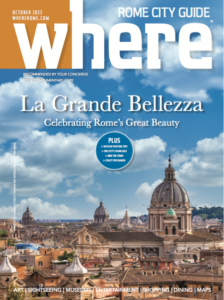 The Symbols and Colors of Rome