No matter how much you adore traipsing through museums, studying ancient ruins, and marveling at monuments, every tourist needs a break from non-stop culture at some point, and that’s doubly true for the smallest of travelers. Luckily, Rome possesses an oasis of nature and wildlife, a peaceful refuge where kids and their parents can observe and learn about more than 150 species of animals, many of which are endangered. Rome’s Bioparco was founded in 1911 as one of the first zoos in the world to allow open, outdoor access to the animals. Nevertheless, for much of its existence, it was little more than a “museum of the living,” a place intended solely for the entertainment of its visitors, who could admire rare and tropical species. Since 1994, the park has undergone many changes, transforming itself into a humane environment providing animals with natural habitats and stimulating activities, while maintaining the elegant turn-of-the-century architecture of its original structure. The Bioparco is dedicated above all to protecting the environment and conserving endangered species. The animals are no longer captured in the wild, but are all born in captivity, loaned between zoos for reproduction purposes, or rescued from international livestock smuggling or illegal detention. The park is made up of several diverse areas, where the animals live in conditions as close to their natural habitats as possible. The village of the chimps is home to Edy, Susy, Pippi, and Bingo. Edy was rescued from a circus after suffering abuse and neglect, and Bingo was discovered in a nightclub in Pescara, where he was dressed in a tuxedo to entertain the guests. In his early days at the Bioparco, he was bothered by the daylight, having lived most of his life indoors, awake during the night. There are also areas dedicated to several other varieties of primates, from the majestic orangutans, Petronilla  and her daughters Martina and Zoe, down to the miniscule pygmy marmosets. The valley of the bears consists of a waterfall and a large artificial lake where visitors can watch the bears play underwater from behind a wall of glass. The area dedicated to giraffes features a raised walkway, offering views of these regal creatures from their impressive height, and the lions’ den proudly houses a pair of Asian lions, Bellamy and Asha, some of the most endangered animals on the planet, with only 300 left in the wild. The park is also the home of two Sumatran tigers, Kasih and Tila, Sofia the Asian elephant, and two aquatic hippos, Mimì and Pipa. 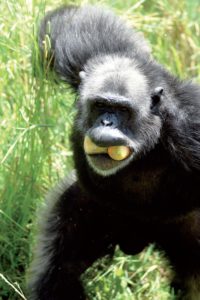 The reptile house is one of the most popular spots, hosting a wide variety of species from several continents. It faithfully reproduces the habitats of the different species, with hundreds of exotic plants, including orchids, bromeliads, and ferns, which recreate a lush rainforest atmosphere.  It’s home to tortoises, crocodiles, and the deadly Komodo dragon, the largest and most dangerous lizard on earth. A section of the reptile house is dedicated to invertebrates, with insects, spiders, multihued tropical crabs, giant snails from Zanzibar, locusts, and giant caterpillars—in short, almost any creepy-crawly you could think of. Kids can take part in special “close encounters” with whistling roaches, ferrets, frogs, stick insects, snakes, and many other creatures that sometimes inspire fear or disgust, but are nevertheless vital to the natural balance of the environment. Another fascinating area is the great aviary, a massive space that allows even large birds to y long distances. Some of its inhabitants include the white pelican, the gray crowned crane, the African spoonbill, the western swamp hen, the white stork, and the African sacred ibis. Other species, such as ostriches, zebras, wallabies, emus, maras, rheas, and capybaras coexist in mixed exhibitions around the park, and there’s even a small farm area, where kids can discover chickens, rabbits, goats, and sheep, ani- mals that are, ironically, often less known to them than their exotic counter- parts. 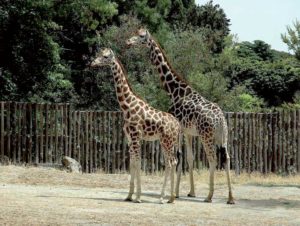 With all these animals to take care of, what happens when they get sick? There’s a veterinarian clinic on the premises, equipped with an emergency room and an operating room with modern equip- ment for all sorts of surgeries. The animals are cared for by a team of veterinarians led by Federico Coccìa, who is also the presi- dent of the Bioparco Foundation. In addition to all this, the park contains a large lake, a picnic area, a children’s play area, a café, a bookshop, and a miniature locomotive that zips around the park for a convenient and fun way to get from one area to the next.