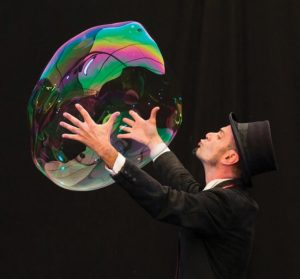 Actor and clown Michele Cafaggi teams up with musicians Davide Baldi and Federico Caruso for a concert described as a trio for piano and bubbles. This performance, recommended for concertgoers of all ages, stars an eccentric pianist who appears on stage with all the emotion and the tension of the occasion, yet is beset by unexpected events, unlikely incidents, fortuitous encounters, and hilarious plot twists. In addition to piano, the clarinet, accordion, guitar, and percussion make appearances, all in the company of bubbles. Lots of bubbles.

According to Italian tradition, on the feast day of the Epiphany, a friendly witch named La Befana fills the stockings of children, just like a certain jolly old elf we all know and love. Good children get candy and naughty ones get coal, a ritual that symbolizes the three kings who brought gifts to baby Jesus the same day. To get to know the old lady in person, head to Piazza Navona where Befanas hand out candy to children, marking the end of the Christmas season.

La Traviata – from Saturday 12 to Saturday 26

One of the best-loved works of the operatic canon, Verdi’s La Traviata tells a story of unexpected love, unbridled passion, selflessness, and eventual tragedy that has resounded in the hearts of opera-goers since it premiered in Venice in 1853. With stage direction by Academy-Award-winner Sofia Coppola, costumes by none other than Valentino, and music direction by Pietro Rizzo, this production by the Teatro dell’Opera di Roma promises to be the operatic event of the year. Teatro Costanzi.

A combination of mime, modern dance, and surreal masked theater, Swiss troupe Mummenschanz has been inspiring
surprise, amazement, and laughter on all five continents since its founding in 1972. Artistic director Floriana Frassetto, together with the company, presents an all-new show, You and Me, in which bodies become faces, glow-in-the-dark costumes are transformed into animals, and a pair of giant hands interact with the audience, all with the help of enchanting lights that create the perfect illusion.

Catch it at Teatro Olimpico. 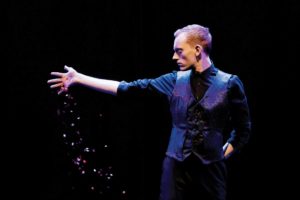 An absolutely unmissable event this month—particularly for the little ones is Alchemie, the latest installment of the fabulous annual magic festival Supermagic. Now in its 16th edition,n this year the festival presents a star-studded show inspired by the mysterious world of alchemy. Some of the most acclaimed illusionists around the world perform on the same stage, each one more mystifying and mesmerizing than the next.
Teatro Olimpico. 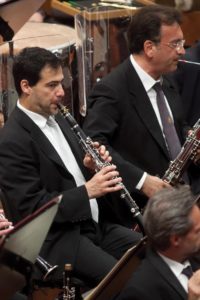 The unmistakable glissando of a solo clarinet heralds the beginning of this legendary work, one of the greatest triumphs of American composer George Gershwin, and indeed the entirety of 20th-century classical music. A daring combination of jazz and lyricism, Rhapsody in Blue continues to delight audiences nearly one hundred years after its première. Hear the Santa Cecilia National Orchestra perform this work, as well as Gershwin’s American in Paris, and Pelleas und Melisande by Arnold Schönberg, all under the baton of Sir Antonio Pappano.

2 Go for a spin around the ice skating rink at the Auditorium PDM.

3 Beat the winter blues with a lling dish of carbonara.

7 Masterpieces by Andy Warhol are displayed at the Vittoriano Complex.

9 Catch family-friendly exhibit Pixar: 30 Years of Animation at the PalaExpo.

10 Emilio Ochando and Compania perform Spanish dance and amenco at the PDM.

12 Dine at one of the Eternal City’s Michelin-starred restaurants.

13 Visit Villa Medici, the seat of the spectacular French Academy in Rome.

15 Treat little ones to Cinderella on Ice at Teatro Brancaccio.

16 Exhibit Roma Universalis: The Empire and the Dynasty from Africa runs at the Colosseum.

17 The Blessing of the Animals takes place today at St. Peter’s Square.

21 Browse Mercato Testaccio, a hallmark of the Testaccio neighborhood for over a century.

22 For fine Japanese dining in an exquisite setting, book a table at Taki tonight.

23 Photography exhibit Wind, Heat, Rain, Storm is on at the Museum of Rome in Trastevere.

24 Revel in the beauty of Mozart’s Requiem, performed by the Santa Cecilia Orchestra.

27 Experience multimedia show The Last Judgement at the Auditorium Conciliazione.

28 Go underground at the Basilica of San Clemente to see pre-Christian ruins.

29 Literature buffs should check out the Keats- Shelley Memorial House.

31 Take in bold street art in the little-known Trullo neighborhood . 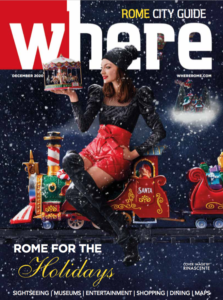