From modern ballet to world-famous street art, from multicultural folk music to outdoor contemporary art installations, September is serving up an exciting program of events you’ll have to see to believe.

Works of the most famous “unknown” artist in the world go on exhibit this month in the delightfully contrasting venue of the Chiostro del Bramante, a marvel of Renaissance architecture. Banksy – A Visual Protest presents more than 90 works, narrating Banksy’s unique vision, expressed through irony, denunciation, politics, intelligence, and, most pointedly, protest. From Love is in the Air to Girl with Balloon; from Queen Vic to Napalm, Toxic Mary, and HMV, the works on display create a fascinating representation of Banksy’s direct and provocative artistic language. chiostrodelbramante.it

Back to Nature – From Tuesday 15

Villa Borghese, Rome’s most celebrated public park, explodes with contemporary art in their new Back to Nature outdoor exhibition. The beloved historic park will host a core of installations among the trees, each one either designed or specially reinvented for the occasion. Discover fascinating works by internationally renowned artists such as Andreco, Mario Merz, Mimmo Paladino, Benedetto Pietromarchi, Davide Rivalta, Grazia Toderi, Edoardo Tresoldi, and Nico Vascellari. Occasional musical performances and street artist interventions will accompany the installations in a harmonious dialogue between art and nature. The best part? Admission is free!

Fresh off the success of their sold-out summer performances in the Circus Maximus, the modern ballet The Four Seasons will be getting an encore at Teatro Costanzi. Versatile creator Giuliano Peparini is responsible for choreography, direction, and video in this modern masterpiece, which tells the story of the four “seasons” of love: from the first shy glances of spring (Rebecca Bianchi and Claudio Cocino, pictured), to the fires of passion in summer (Marianna Suriano and Giacomo Castellana), the gradual decadence of autumn (Susanna Salvie and Michele Satriano), to the bitter end in winter (Sara Loro and Alessio Rezza: Winter). Interpreting the work is the Ballet Corps of the Teatro dell’Opera di Roma, to the accompaniment of Antonio Vivaldi’s eponymous composition. operaroma.it

The international outdoor concert series of the Roman Philharmonic Academy, usually performed in June and July, has been moved to the very tail end of summer this year, and will in fact culminate on the autumnal equinox. AFteR, a clear reference to the aftermath of the unprecedented lockdown of the entire country this past spring, will see musicians from around the world come together to interpret classical and folk music from their respective cultures in a lush green space near Piazza del Popolo. This year’s edition features artists from Iran, Japan, India, and the Balkan states, presenting a stimulating comparison between cultures and a continuous mutual exchange of knowledge. filarmonicaromana.org

Italian folk rock band Il Muro del Canto performs live in the evocative outdoor setting of the Cavea of the Auditorium Parco della Musica. With a rough and intense sound, the group combines modernity and tradition in an authentic and timeless voice. Their latest album, L’Amore Mio Non More, maintains their distinctive traits while, at the same time, introducing numerous rhythmic and harmonic innovations. The band’s search for a direct and pure language continues, strengthened by a strong Roman dialectical influence, which clearly emerges in the album’s title with a passionate and stubborn declaration of intent. auditorium.com 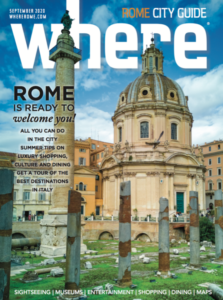