Aries > Members of this re sign love to be number one—it’s no coincidence that they’re the first sign in the zodiac! For them, everything is more fun if it’s a competition, so if you belong to this sign, why not challenge your travel mates to a friendly contest? Stage a race up the steps of Santa Maria in Aracoeli, go on a statue “safari” where top points go to whoever spots the most animal sculptures, see who can visit the most churches in one day, or eat the most pasta in one sitting. One thing’s for certain, unless they’re Ariens too, they won’t be able to keep up.

Taurus > Taureans are down to earth and stubborn, but they’re also the most sensual sign. They savor ne wine, good food, relaxation, comfort, and all things luxury. The perfect itinerary for members of this sign would be a visit to an exclusive spa followed by a designer shopping spree and a gourmet meal. Hotel de Russie (Via del Babuino, 9) boasts one of the nest spas in town; after an indulgent treatment, stroll down Via dei Condotti to purchase some couture threads. End the day with a meal at Michelin-starred Il Pagliaccio (Via dei Banchi Vecchi, 129a).

Gemini > With their multifaceted personalities, Geminis have numerous interests and in nite intellectual curiosity, a bit like the original Renaissance man Leonardo Da Vinci. What better way to recognize these traits in yourself than by a day celebrating the great artist? An exhibit at Villa Farnesina (Via della Lungara, 230), on until the 12th of the month, explores Da Vinci’s influence on Roman artists of his period. Meanwhile, Leonardo Da Vinci Experience (leonardodavincimuseo.com) recreates his most ingenious inventions and well-known paintings with original materials, and even presents a hypothesized version of his studio, replete with views of the Tuscan countryside out the windows.

Cancer > Homebodies by nature, Cancers value family and close relationships, and have an emotional depth that surpasses all other signs. If you’re a Cancer, chances are you’re traveling with your family. To make sure you never forget this trip, invest in a shoot with photographer Alina Vicente. Specializing in candid family photography, Alina will artfully capture you, your loved ones, and Rome’s gorgeous monuments—no selfie stick required. Find her at alinafotoemozioni.com.

Leo > Like all felines, from the house cat to the mighty lion, Leos love to be up high. If you’re a Leo, climb to the top of the Pincian Hill for a sprawling view of the entire city, particularly rewarding at sunset. This spot is especially apropos since Leos are naturally romantic creatures, and the Pincian Hill is a favorite spot for lovers to share a kiss as the sun goes down.

Virgo > If there are two things all Virgos share, it’s a love for books and a passion for organization. What better place to explore than one of the city’s gorgeous and meticulously ordered libraries? Visit Biblioteca Casanatense (Via di Sant’Ignazio, 52), an exquisite gem that every bibliophile’s dreams are made of, Biblioteca Angelica (Via Sant’Agostino, 8), with its three stories of towering shelves bursting with historic titles, or Biblioteca dell’Accademia Nazionale dei Lincei (Via della Lungara, 10), boasting stuccoed details, frescoed ceilings, and an oversized globe.

Libra > Libras are represented by the scales, so they crave symmetry and balance, two governing tenants of Renaissance art and architecture. Visit Piazza del Campidoglio, a beautiful space designed by Michelangelo. After he created a stunning, symmetrical façade for the medieval Palazzo Senatorio in the center of the square, he designed the palace on the left (Palazzo Nuovo) to perfectly mirror the preexisting Palazzo dei Conservatori on the right. Even the square’s paving stones create a delightful and harmonious star design.

Scorpio > Mysterious and private, Scorpios are perhaps the most intriguing sign in the zodiac. They would do well to explore the mystical religion of Mithraism in one of the many underground temples where this ancient cult was practiced. The most famous in the city can be found under San Clemente church (Via Labicana, 95), where a private 1st-century home was converted into a mithraeum; here the sacred rites of the cult (involving a ritual banquet and the slaying of a sacred bull) were carried out until the religion was eventually banned. The scorpion is even one of the creatures depicted in the tauroctony, the religion’s iconography.

Sagittarius > Satisfy the adventurous and thrill-seeking spirit of the Sagittarian by skydiving over the Eternal City. From the nearby town of Monte Compatri, a short drive of just 10 miles east of Rome, Sunflyers (sunflyers.it) offers a tandem dive with an expert jumpmaster from an altitude of over 13,000 feet. Gaze at the historic Alban Hills on the horizon as you freefall for up to 45 seconds at over one hundred miles per hour, then gently glide the rest of the way down while looking out over the ancient Roman countryside.

Capricorn > Capricorns are best-known for their persistence and determination. No matter the challenge, they will not be daunted! Silvio Negri famously said that even a lifetime isn’t enough to see all of Rome, and Capricorns might just try to prove him wrong. If you’re determined to see everything, start with the Colosseum and the Vatican (book tickets at coopculture.it and vatican.va respectively). Next, take a walk from the top of the city to the bottom, from Piazza del Popolo, the Spanish Steps, and the Trevi Fountain, past the Pantheon and Piazza Navona, and ending in Trastevere. Don’t forget Castel Sant’Angelo and Via Appia Antica. Rome has over 100 museums and 900 churches—we never said it would be easy!

Aquarius > A universal trait of Aquarians is their nurturing instinct. They love taking care of others, particularly animals. An ideal afternoon for an Aquarian in Rome would be a visit to the Bioparco (V.le del Giardino Zoologico). This wildlife park rejects the term zoo, as it uses large open areas where the animals can move about freely instead of cages, recreating as much as possible each species’ unique habitat. Visitors can take a fascinating peek into the lives of animals like giraffes, elephants, and tigers.

Pisces > As the most creative and emotional signs in the zodiac, Pisces tend to mix fantasy with reality. In Rome, this might not be a bad thing. Several ancient sites utilize Virtual Reality technology to enhance visitor experience
and comprehension. Circus Maximus, the Colosseum, and the Domus Romane of Palazzo Valentini all use some form of VR to make archeological sites that might otherwise be hard to visualize come dramatically to life. 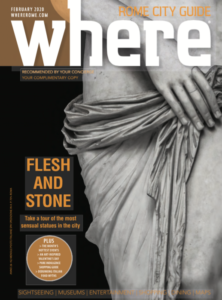