Secrets Behind the Art

On a typical visit to Rome, the average tourist sees dozens if not hundreds of works of art. But beyond the subject matter, the genius of the artist, the colors and techniques used, and the sheer beauty of Rome’s countless master- pieces, have you ever wondered: is there something behind the art? In truth, there are several works of art in Rome that hide secrets within their strokes. Some are cryptic messages, some are religious commentary, and some are simply obscure symbolism that only the artist can decode. Read on for seven of the most fascinating, and then go see them with newly opened eyes. 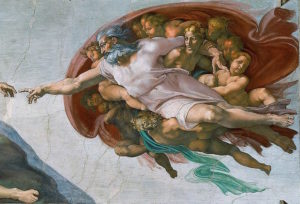 Much of Rome’s art that holds secret meanings can be found inside the Vatican Museums, which is no surprise considering the mysterious nature of the place. Perhaps the most famous is the Vatican’s number-one sight, The Creation of Adam, the centerpiece of the Sistine Chapel ceiling. Surrounding God are a dozen or so figures, including the as-yet-uncreated Eve, and around them all billows a large purple mantle. The shape of this fabric is an unmistakable cross-section of the human brain, down to the position of certain  figures that make clear outlines of specific parts of the organ. Michelangelo was known to have dissected human corpses in secret, although this was strictly forbidden by the church at the time. 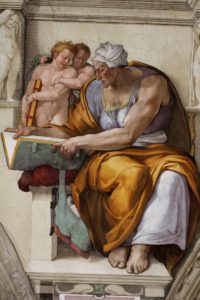 In the same chapel there is a much smaller and more obscure message that Michelangelo included in his masterpiece. The detail can be found on the spandrel that features the Cumean Sibyl. Contrasting with the other sibyls, who are all young and some strikingly beautiful, the Cumean Sibyl is a hag with a lined face and a manly body. This choice might have been a deliberate slight to Pope Julius II, the pontiff who commissioned the chapel ceiling and was the bane of Michelangelo’s existence. Julius II claimed that when the Cumean Sibyl had prophesized the coming of a savior, she was talking about the pope himself—not Christ. Michelangelo added insult to injury with a rude gesture from the nude figure depicted beside her. His thumb is placed between his first and second fingers, a gesture that was called “giving the fig,” the equivalent of the middle finger today in terms of disrespect and vulgarity.

Just a few rooms away in the dark and secretive Borgia Apartment, we find another mysterious appearance. The work in question is Pinturicchio’s The Risen Christ, a fresco completed in 1494, shortly after the discovery of the Americas. It’s a detail so tiny, you’d never see it if you didn’t know to look—in fact, it was only discovered after heavy restorations. In the background behind the sarcophagus, just to the left of the portrait of Juan Borgia, stands a group of what appear to be Native Americans, replete with feathered headdresses and mohawks. If confirmed by art historians, the work would be the first European painting to depict Native Americans. 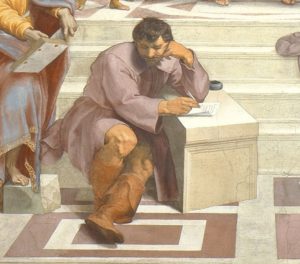 Renaissance superstar Raphael frescoed the residence of Pope Julius II—the rooms directly above the Borgia Apartment—a decade later, including the imposing School of Athens, in which Raphael depicts some of the greatest thinkers of ancient times, from Plato and Socrates to Euclid and Pythagoras. In addition, Raphael honored some of the most brilliant artists of his day, placing their features within the portraits of the ancients. Plato bears Leonardo’s face, Euclid appears as the architect Donato Bramante, and most famously, Michelangelo’s face was depicted in the guise of the cynic Heraclitus. Although it was a great compliment for Raphael to include Michelangelo in the work (particularly since they were by no means friendly), the former did get in an innocent jab at his rival: although every other figure appears barefoot or in sandals, Michelangelo is depicted wearing his worn-out boots, the very ones he infamously never took off, not even to sleep.

Raphael was not the only artist to seek to insult one of his creative rivals within a work of art. Much more damning than Michelangelo’s boots was the portrait of Caravaggio in Giovanni Baglioni’s Sacred and Profane Love, now located at Palazzo Barberini. Baglioni was a mediocre artist who nevertheless enjoyed great popularity and patronage from the church during his lifetime. Although he was derisive of Caravaggio’s work, he copied the chiaroscuro master’s style, a fact that Caravaggio highly resented. When Caravaggio publicly insulted Baglioni’s Sacred and Profane Love, Baglioni created a new version of the work: a chaste and armored Sacred Love interrupts a tryst between Profane Love and the devil himself who has the features of Caravaggio, a not-so-subtle rebuke of the latter’s morals. 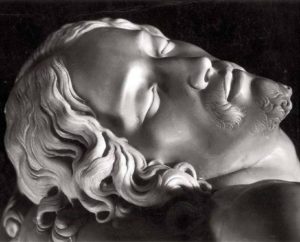 Another mystery can be found in one of the Vatican’s greatest treasures, Michelangelo’s Pietà. Many hypothesize that the handsome, mustached face and limp, life- less body of Christ were modeled on the corpse of Juan Borgia, the son of the Pope at the time. Juan was murdered in 1497 (a crime still unsolved to this day), and his stabbed body was dragged from the Tiber less than a year before Michelangelo started working on this masterpiece. In addition, a detail invisible to a visitor (the sculpture sits behind glass) is the fact that Christ has an extra incisor, in essence, a third front tooth. Incisors represent sin, and so it could follow that Michelangelo added the tooth to illustrate Christ taking on the sins of the world.

Caravaggio (whose given name was Michelangelo) honored his namesake in his Entombment of Christ, which now hangs in the Pinacoteca of the Vatican Museums. The figure of Nicodemus, who holds the legs of Christ, bears a face identical to portraits of a middle-aged Michelangelo, complete with his high, wide forehead, full beard, and a broken nose. In addition, the stark white arm of Christ that hangs down to touch the tomb is identical to Michelangelo’s marble version in the Pietà, carved over a century earlier. 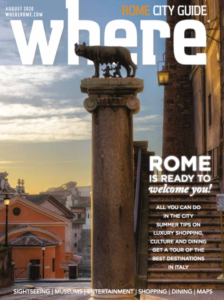