From the Circus Maximus to the Colosseum to the Stadium of Domitian, sport and sporting spectacles have been a part of Roman civic life since its very inception. Half of the proverbial “bread and circuses” that famously kept the Roman masses docile and content, sporting events were the most awe-inspiring form of entertainment and by far the most popular. But the grand scale of these games, as well as the imposing venues they took place in, were also a testament to Roman greatness. Over the centuries, more modern Roman leaders—be they popes or presidents—have attempted to imitate
the glory of ancient Rome, from the rebuilding of aqueducts to the repurposing of obelisks in front of the city’s major chur- ches and monuments. In recent memory, this was most notably true in the case of Italy’s former dictator, Benito Mussolini. In an e ort to mimic the splendor of Rome’s past, particularly where sports were
concerned, Mussolini commissioned the Foro Italico (originally the Foro Mussolini). The sports complex, built between 1928 and 1938 and designed by Fascist architects Enrico Del Debbio and Luigi Moretti, was directly inspired by the forums of ancient Rome. 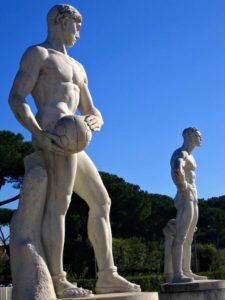 Mussolini’s hope in building this ambitious project was to win the bid to host the 1940 summer Olympics in Rome. The bid was not successful, and the games ended up being cancelled due to the outbreak of World War II. Nevertheless, the Foro would go on to fulfill its destiny, hosting the summer games in 1960. Today, the Foro Italico is made up of a number of sporting venues, including the Aquatics Center, the Tennis Club, featuring eleven clay surface tennis courts and three show courts, several smaller stadiums and event venues, and of course, the Olympic Stadium, the largest sports facility in the city. The complex also boasts several internal mosaics and frescoes that reflected the regime’s political propaganda. But the Foro’s crowning jewel is the Stadio dei Marmi. This oblong open-air stadium features steps in Carrara marble and is surrounded by Fascist-era statues that call to mind the Greco-Roman sculptures that would have decorated Rome’s sporting venues 2000 years ago. The 59 male nude statues hold modern sporting equipment, everything from cricket bats to tennis rackets, and although at rst glance they appear to mimic the ancient style, their angular features reveal their Fascist origins. 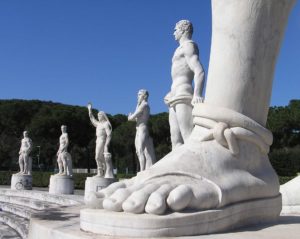 The Stadio dei Marmi was initially used as a training arena for the students of the nearby Academy of Physical Education, but today, along with the marble Fascist-era “obelisk” and the Fountain of the Sphere with its ancient-style mosaics by Giulio Rosso, it has become a monument to the stark, minimalist architectural style that defined Fascist Rome.

The Soul of the City

The World of Bansky

A Splash of History